Gourmet Home Cuisine is an off-premise catering and party rental company serving private, corporate and government clients in northern New Jersey, Rockland County, and Manhattan for more than three decades. Culinary Institute of America graduate William (Billy) Cron and his staff create high quality, well-organized, memorable events of all types and sizes. Chef Cron, whose customer base comes largely from referrals from satisfied clients, will give you his personal attention and will work with any culinary, budgetary, or logistical challenges you face.

William (Billy) Cron is Executive Chef and Owner of Gourmet Home Cuisine. A 1983 graduate of the esteemed Culinary Institute of America in Hyde Park, New York, Chef Cron’s background in the foodservice industry is rich with diversity. Prior to establishing his own catering company in 1985, he was on staff at two French restaurants in Bergen County, as pastry chef and assistant to the executive chef. In the early 2000s, he owned 200 Main Street in New Milford, where he served American and European cuisine with inflections of Asian and other ethnic flavors.

He has also catered the US Army’s 69th Regiment (Fighting Irish) post-St. Patrick’s Day Parade dinner for over a decade has cooked for Fortune 500 companies, as well as highly regarded local businesses. Chef Cron worked in concert with the US Secret Service to provide tenting and equipment through his party rental company, GHC Rentals, for former President George W. Bush for press conferences at locations in New Jersey. 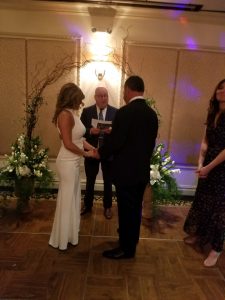 Chef William Cron is an ordained Universal Life Church minister, able to perform civil wedding ceremonies. Many couples enjoy the simplicity and continuity of holding their wedding ceremony and reception at the same venue.

Contact Chef Cron about creating a wedding package that includes everything for your special day:  matrimonial services, catering, and all rental equipment. 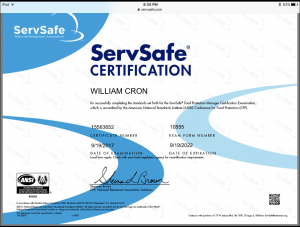